Bug of the Month May 2020: Mourning Cloak First Luna Moth Sighting of the Year

Subject:  Karner blue butterfly
Geographic location of the bug:  Albany Pine Bush, Albany, NY
Date: 05/27/2020
Time: 05:43 PM EDT
Your letter to the bugman:  Hi What’s that Bug!
Here’s a mystery for you. I’m quite certain this is a Karner blue butterfly, Plebejus melissa samuelis. You may be aware that our Albany Pine Bush in upstate New York is one of the few habitats this endangered subspecies can thrive, since its larvae feed only on the wild blue lupine that grows here. I saw quite a few Karner blues out among the lupines on this visit! None of our other local blues have that much orange along the wing, so it has to be a Karner.
The mystery: what the heck is going on with its abdomen? What is that orange stuff at the end? I thought it might be laying an egg, but as far as I can tell their eggs are light gray or white, not orange. And anyway it’s not on a lupine–I think the plant is a raspberry or blackberry. It stayed in this position for a couple of minutes before fluttering off, and I didn’t realize there was anything weird until I looked at the photos.
I’ll also include a better image of a different individual for your enjoyment. This little guy seemed to be more interested in lapping up my sweat than anything else–I tried to coax it onto a lupine, but it wouldn’t leave!
How you want your letter signed:  Susan B. 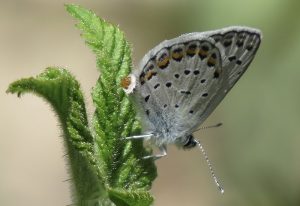 Dear Susan,
Though we are quite excited to post your Karner Blue images, we will start with the mystery.  We don’t know what that is, but we suspect it is not a good thing.  We suspect this might be evidence of parasitism, possibly Dipteran, meaning a type of fly.  Though we don’t often site Wikipedia, it does provide this information “A tachinid fly, Aplomya theclarum, has also been listed as a Karner blue butterfly parasite.”*  We will attempt to get a second opinion on this matter.  Meanwhile, we really are thrilled with your images of Karner Blues.  Not only was it described by one of Daniel’s favorite writers, Vladimir Nabokov, it is a new species for our site that currently contains over postings. 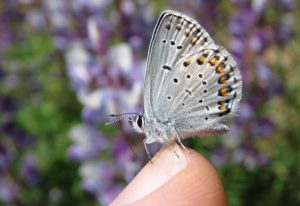 Thank you so much for your reply! I was pretty excited to spot so many Karner blues that day—usually I don’t get out to the Pine Bush until later in the year, when they are scarcer. I’ll be going back early in the morning to see if I can catch them basking with their wings open.
That’s a good thought that the orange mass may be parasites. I hadn’t even considered that it could be somebody else’s eggs. I’ve sent the image along to the staff at the Albany Pine Bush to see if they can identify it for sure, and also so that they can document it, since they monitor all the happenings with the wildlife there.
Susan B.
Karner blue update—I heard back from the entomologist at the Albany Pine Bush regarding the weird orange mass on my Karner blue butterfly. Here’s her response (with her permission to share):
“Hi Susan,
Thanks for sending along the images! I have to tell you, what you are seeing there at the end of the abdomen is rated PG-13. What you captured is the genitalia of a male karner. They don’t usually flash them like that, it is unusual to see as they are usually kept internally until mating. An interesting thing to document, for sure! Thanks again for sharing.
Best,
Dillon”
What a relief to hear that I was only witnessing a bit of lepidopteran exhibitionism, and not a parasite infestation (fascinating though that would be)!
-Susan B.

Thanks for the fascinating update Susan.  It is interesting that Nabokov classified many of the Blues using a theoretical taxonomy that he devised after dissecting the genitalia of museum specimens.