Subject:  2 wasps nesting on motorbike fork
Geographic location of the bug:  Taipei City, Taiwan
Date: 08/29/2021
Time: 12:38 PM EDT
Your letter to the bugman:  This afternoon I found these 2 guys nesting off the lower end of the fork of my motorbike that I had had covered and not ridden for a couple of months. Over the past 3 days I rode the bike several times, including once after I had discovered them. They seemed unfazed by the 50 kmph speeds, winds, vibration, etc., never letting go of the nest or taking flight, although they moved about on the nest.
My questions:
1. What type of wasp/hornet is it?
2. Can I just cut the rope-like thing that it hangs off and then run? Would they attack me/give chase? How long would they stay around the nest, and irritated?
I wouldn’t like to endanger their lives nor my own.
How you want your letter signed:  Tauno 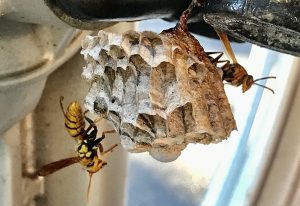 Dear Tauno,
We love, love, love your letter and we are making your nesting Paper Wasps the Bug of the Month for September 2021. We have even posted a submission in 2014 of Paper Wasps in Taiwan.  Paper Wasps in the genus Polistes are found in many parts of the world.  They are social wasps and according to the North American site BugGuide:  “Mature colonies have up to 30 adults.”  If you cut the nest, with only two Paper Wasps, one the queen, protecting the next, we doubt you will be stung, but we can assure you the Paper Wasps will abandon the nest.  The queen may attempt to build a new nest.  We can’t believe you rode the motorbike at 50kmph and they stayed with you and the nest. 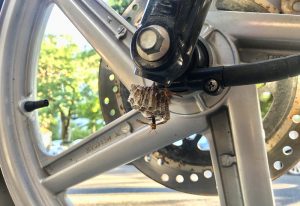 UPDATE:  September 2, 2021
Dear Bugman,
I am deeply grateful for your answer and, on behalf of the biker wasps, overwhelmed by the honor of being featured on your website.
An update:Your prediction was absolutely correct: the wasps abandoned the nest. I parked my bike, this time in a more open area and without covering it; on the first night at least one of these guys was still there, dozing off, but by the evening of the next day they were nowhere to be seen. For all the lack of privacy, I’d probably have moved, too.
I waited until the next afternoon and then mustered up the courage to pluck off the (really a beginning of a) nest with bare fingers, kind of expecting to see an empty shell (wouldn’t you finish building your home first and only then move your family in?), but to my surprise a little beady face was staring at me from almost each of the compartments (see the pic), some apparently trying to wiggle me to bring them high tea. Thinking the actual family might come back for them I took the whole bundle to the park across the alley and left it under a bush.
From your email it seems that this will probably not happen- so that was a bittersweet goodbye- but I can now say I’ve met a real queen.
Hope they’ll find a place for a more peaceful home soon.
Thank you! 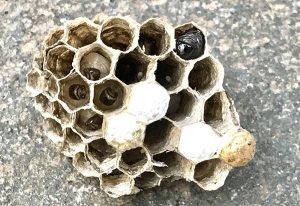 Thank you for the wonderful update Tauno.  Regarding moving the family in before the home is finished:  The queen constructed the beginning of the nest and she produced her first generation of workers, and by your account, there were only a few.  For that first generation, the queen also had to do all the hunting.  Once she had several workers, she began producing her second generation of workers and there were more helpers so it can be a bigger brood.