Elephant Hawkmoth Caterpillar from the UK

Subject:  Caterpillar ?
Geographic location of the bug:  Uk Britain
Date: 09/03/2021
Time: 07:42 AM EDT
Your letter to the bugman:  Hi, I found this on my decking and was surprised how aggressive and fast it was, could you identify it please
How you want your letter signed:  Mark morgan 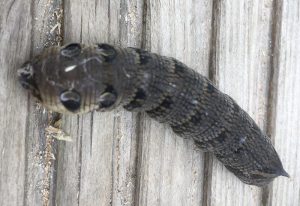 Dear Mark,
This is an Elephant Hawkmoth Caterpillar, Deilephila elpenor, and according to Wildlife Insight:  “The Elephant Hawk-moth caterpillar grows to 85mm in length and is one of the largest and most distinctive caterpillars to be found in the British Isles.
It is also the most frequently seen hawk-moth caterpillar, often found feeding and wandering in search for somewhere to pupate in gardens.
The species is named after the caterpillars resemblance to an elephants trunk.
When retracted the caterpillars head recoils giving the impression of a much larger head. The two large ‘eye-like’ markings behind the head also suggest a much larger animal, appearing startling to predators.”  The aggression you mention is an act.  Often Hornworms in the family Sphingidae will thrash about hoping to startle a predator into perceiving a threat.

Subject:  Can’t narrow it down..
Geographic location of the bug:  Eastern Panhandle, West Virginia
Date: 08/28/2021
Time: 08:09 PM EDT
Your letter to the bugman:  I saw this hanging out on my car and right away thought it might be a bug/insect.  It’s interesting because it’s camouflaged and would hide very well on trees in my yard, but it was on my silver car and stood out like a sore thumb.  How it ended up on my car, I have no idea unless it fell from above from the tree.  Currently it’s August 2021 and weather is 90 degrees and humid.  When it moved, the many white feet moved from back to front and slow.  I saw it’s face on the underside, not out front.  Anyhow… I was thinking along the lines of a millipede, or isopod but can’t find any pictures close enough to id.
How you want your letter signed:  Camouflaged Something 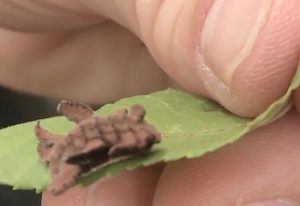 Dear CS,
Very few people realize they are looking at a Caterpillar when they encounter a Monkey Slug.  Handle with caution as the Monkey Slug can sting.

Subject:  Unidentified caterpillar
Geographic location of the bug:  Sahuarita AZ
Date: 08/25/2021
Time: 05:29 PM EDT
Your letter to the bugman:  After searching I cannot identify this caterpillar. Would you be able to tell me what it is?
How you want your letter signed :  Luanne 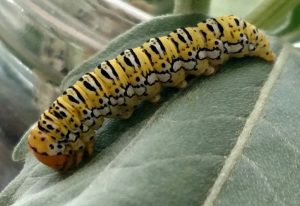 Dear Luanne,
Daniel has a vague memory of seeing this caterpillar before, but maybe that is because it resembles the Hooded Owlet Caterpillars in the genus Cuculia, which are pictured on BugGuide.  It also resembles but is not a Zebra Caterpillar.  We will continue to attempt an identification and perhaps one of our readers will recognize this distinctive looking Caterpillar.  Are you able to provide us with the name of the plant upon which it was found?

Hello Daniel, Thank you for your email! I’m not able to figure out what the plant is but I’ll attach a photo of it. Thanks again! Luanne 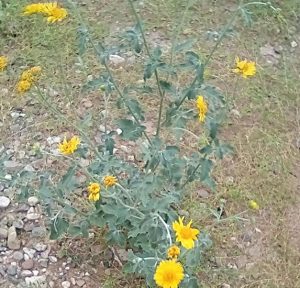 Update:  September 1, 2021
Thanks to Ben who wrote a comment identifying Basilodes chrysopis. and providing a link to the Moth Photographers Group.  According to BugGuide the moth is called the Guilded Seedcopper.

Subject:  What is this
Geographic location of the bug:  Southwest Florida
Date: 08/27/2021
Time: 07:07 PM EDT
Your letter to the bugman:  Found this crawling around on rocks today in my landscaping
How you want your letter signed:  Bugman 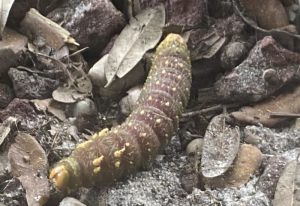 To Whom it may Concern,
You are not the Bugman.  You have requested information from the Bugman.  This is a prepupal Imperial Moth Caterpillar which has finished feeding, left the tree upon which it was feeding, and it is now looking for a place to dig so it can pupate underground.  The adult Imperial Moth is a gorgeous creature.

Lol! I am certainly not the bugman! I thought that space was for how I wanted the letter to me signed; I was very concerned! Thanks for the information!
Crysta aka NOT the bugman

Subject:  caterpillar ID
Geographic location of the bug:  Orange county NYS
Date: 08/21/2021
Time: 06:36 PM EDT
Your letter to the bugman:  Hi Bugman,
Can you please Id this? Took it of concord grapes growing outside in field.
Thanks!
How you want your letter signed:  Linda 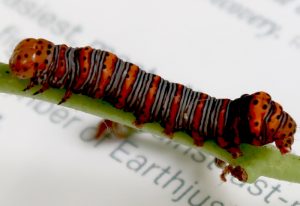 Dear Linda,
This is the caterpillar of an Eight Spotted Forester, Alypia octomaculata, which is pictured on Butterflies and Moths of North America.  Grape is a known food plant.

Dear Daniel,
Thank you very much. I put it back on the grapes, its quite beautiful.
Best,
Linda

Subject:  What kind of caterpillar is this? Silkmoth?
Geographic location of the bug:  Basalt, CO 81621
Date: 08/15/2021
Time: 12:25 AM EDT
Your letter to the bugman :  Found this caterpillar while hiking on our property at 8000 ft elevation.
How you want your letter signed:  Joe 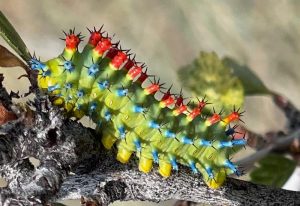 Dear Joe,
This is definitely the Caterpillar of a Giant Silkmoth in the genus Hyalophora, but the species has us puzzled because of the two rows of bright red tubercles.  The Cecropia Moth is not found west of the Continental Divide, and according to the Cecropia Moth description on the Agricultural Science website of Colorado State University:  “The Glover’s silk moth, Hyalophora columbia gloveri, occurs at higher elevations within the region and may be found west of the Continental Divide. … Larvae of the Glover’s silk moth lack the reddish tubercles that are prominent with the cecropia and these are instead colored yellow. Caterpillars primarily feed on leaves of Rhus trilobata, but maple, willow, chokecherry, alder, and wild currant are among the other hosts. Formerly considered a distinct species, the Glover’s silk moth is now classified as a subspecies of the Columbia silk moth, Hyalophora columbia (S.I. Smith).”  Though there are some discrepancies in the description of the caterpillar, our best guess is that this is a Glover’s Silkmoth Caterpillar.  When Daniel returns to Los Angeles next week, he will attempt to contact Bill Oehlke to confirm.  To add to the confusion, there is also inter-species hybridization possible.  This BugGuide discussion on the identification of a Glover’s Silkmoth Caterpillar might interest you.

Thank you very much Daniel!  I look forward to hearing what Bill thinks.
Best,
Joe