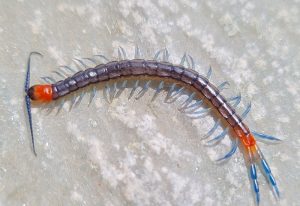 Dear Mr. Markus,
We believe this is a Mediterranean Banded Centipede, Scolopendra cingulata, a species that is known for much individual variation, but we have located two online images that show individuals with blue legs and an orange head.  One is on Encyclopedia of Life and the other on Shutterstock.

What's That Bug? being used to identify specimens in Maria Sibylla Merian illustrations!!!

Subject:  Do I need to burn down the house?
Geographic location of the bug:  Simi Valley, CA
Date: 06/22/2019
Time: 01:12 AM EDT
Your letter to the bugman:  Dear all knowing big men-
I found this centipede in the house today and needless to say, pretty freaked out!
We have small children! Are they carnivorous? Poisonous?
Anything I should look for to find their hiding place if there are more? Or do I need to burn down the house?!?
How you want your letter signed:  Freaked out mama! 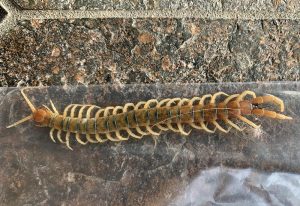 Dear Freaked out mama!,
This is a Multicolored Centipede, identified by Charles Hogue in Insects of the Los Angeles Basin as being Scolopendra polymorpha, and on BugGuide called the Common Desert Centipede or Tiger Centipede.  Centipedes are carnivorous and they do have venom.  According to Hogue:  “The bite of this species may be painful.  Although there are no data on the effects of its poison on humans, it is probably harmless.”  Of the order, BugGuide notes:  “They can bite and also pinch with their last pair of legs. Bites may cause intense pain, swelling, discoloration, numbness, and necrosis, and require medical assistance, although there are no really dangerous, deadly centipedes, and no confirmed human fatalities.”  We suspect it accidentally wandered indoors and we do not recommend burning down the house.

Remains of a Centipede from Australia

Subject:  this bug dropped into my pond
Geographic location of the bug:  Noosa, Queensland Australia
Date: 12/08/2018
Time: 06:57 PM EDT
Your letter to the bugman:  Found this guy on the surface of my pond – guessing it dropped from the tree above??
How you want your letter signed:  Fi

Remains of a Centipede

Dear Fi,
Your image is of the partial remains of a Giant Centipede, possibly Ethmostigmus rubripes.  According to The Australian Museum:  “This is the largest native Australian centipede and is a member of the scolopendrid family.”  The site also states:  “The Giant Centipede ranges in colour from dark blue-green-brown to orange-yelllow.  It has black bands along the body and yellow legs and antenna.  The body is long and flatterned with 25 or 27 body segments and 21 or 23 pairs of legs. The first pair of legs behind the head are modified claws which curve around its head and can deliver venom into its prey. The venom is toxic to both mammals and insects, but does not appear to be strong enough to kill large animals quickly.”  We can only speculate on why you only discovered the posterior remains.  Perhaps a predator like a bird or lizard ate the front end of the Giant Centipede.

Giant Centipede from Australia, we believe

One of the Best Letters Ever

Subject:  Rhysida longipes
Geographic location of the bug:  Miami, Florida
Date: 01/29/2018
Time: 01:06 PM EDT
Your letter to the bugman:  When visiting relatives in Florida last year, I helped my uncle move old boards out of an unused sandbox. Underneath one board there was a pile of large, greenish centipedes that scattered as they were uncovered. As an invertebrate enthusiast, I am always on the lookout for new species of arthropod to observe, capture,  and/or breed, so I had a container handy and was able to capture a 3-4″ specimen that was slower than the rest. There weren’t any containers large enough to house it in safely so I had to use this yellow bucket until I found an appropriate one.
I had hoped to find other centipede species in Florida such as S. viridis or S. longipes, but this one was clearly neither of those. After a bit of research I learned that R. longipes is an adventive species originally native to Africa and Asia that has now colonized Florida and Mexico as well.  I thought I’d send this in so people could properly identify common giant centipedes, as many pictures of R. longipes from Florida are mistakenly identified as Scolopendra and Hemiscolopendra on other sites.
As for the specimen I caught, she is now comfortably living in captivity and has regrown some of the lost antennomeres since these photos were taken.
How you want your letter signed:  lawnshrimp

Dear lawnshrimp,
Thanks for sending your images of the introduced African Longtail Centipede, a name we located on FlickR where it states:  “Though this exotic species has been found on occasion in Florida, all but one incidence was of solitary animals and it has never been considered an established part of the Florida fauna. Late in 2014, while on a scientific collecting trip to south Florida, we came across a large population of this species, which included juveniles through adults, on one of the main Keys. The animals had never been recorded from this area. Later that same evening, we located a large adult just outside of the Everglades National Park, representing an additional locality for this taxon. We wrote up a brief communication for this new, established member of the south Florida ecosystem for the Florida Entomologist which is currently in review.”  We also found your images posted to Arachnoboards.  Whenever we learn of an introduced species into an ecosystem, we are concerned that native species might be displaced due to larger or more aggresive introductions.

Subject:  What Centipede is this?
Geographic location of the bug:  Pretoria, South Africa
Date: 11/21/2017
Time: 01:11 AM EDT
Hi,
PLease can you identify what type of Centipede this is?  My puppy is finding them irresistible to catch and kill unfortunately.
How you want your letter signed:  Red legged Centipede

Based on this SA Reptiles posting, and this Arachnoboards posting, we believe this Centipede might be Cormocephalus nitidus.

Subject:  Creepy scolopendra!
Geographic location of the bug:  Colombia, South America.
Date: 11/13/2017
Time: 11:01 AM EDT
Well, today in a new (and, frankly, creepy) chapter of bugs in my room, a 4 inches long scolopendra just walked into my room through the door as if it was nothing. Welcome to the South. Even though I have phobia to those insects, and against my thirst of hemolymph with these creatures; I caught it, took some pics, and then set it free. I couldn’t really identify its species, though. Could you give me another hand?
How you want your letter signed:  Still terrified, Daniel.

Dear Daniel,
We agree that this is a Bark Centipede in the order Scolopendromorpha, but species identification can be difficult due to so many species looking similar as well as due to considerable color and marking variations within a species.  Many species in the order, especially large individuals like the one you encountered, are capable of delivering a painful, venomous bite, so physical contact should be avoided.  The tolerance you demonstrated in catching and releasing this impressive predator has earned you the Bug Humanitarian tag.