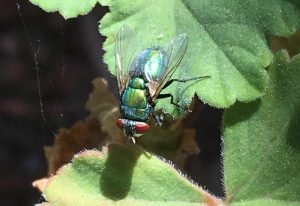 Dear Marlene,
This looks to us like a Green Bottle Fly, Lucilia sericata, which is pictured on the Natural History of Orange County and on BugGuide.   According to BugGuide:  “Larvae feed on carrion. Adults take nectar and have been used as pollinators of onions, cabbages and also other Brassicaceae” and “Larvae are used in forensics to determine the age of a corpse, and in medicine to clean up wounds (they feed on partially decomposed tissue, leaving the healthy one alone).”

Subject:  Fly or parasite
Geographic location of the bug:  Mechanicsburg, pa
Date: 08/11/2018
Time: 04:31 PM EDT
Your letter to the bugman:  I have found several of these flies on my pepper plants. I am unable to find any information about them. They seem to attach themselves on the leaves with almost a web like thing and than die. Or something. Not really sure.
How you want your letter signed:  Courtney Kerr

Dear Courtney,
Flies and Parasites are not mutually exclusive as there are many parasitoid Flies, including Tachinid Flies.  These are Flies, and they have been infested with a fungus infection.  Here is a similar looking BugGuide image, and your Flies also appear to be Blow Flies.  Many creatures, both plant and animal, can get fungus infections and BugGuide has an entire section devoted to Fungus Ridden Flies.

Subject:  What Is this wierd fly?
Geographic location of the bug:  Nsw, Sydney, Australia
Date: 12/19/2017
Time: 07:09 PM EDT
It has yellow spots on one side, and a sliver green surface (like a fly) on the other side.its overall shape is that of a fly, But the head is in the form of a wasp with it being yellow. It also has the wings of the fly. Overall, It is also prettt big, and It looks like a hybrid of a fly and a wasp. What is it?
How you want your letter signed:  S.A

Dear S.A.,
Alas, your image is far too blurry for us to identify, but we are posting it.  Perhaps one of our readers will take a stab at an identification.

Update:  We can’t believe Cesar Crash provided what seems to be an excellent possibility:  a female Yellow Headed Parasitic Snail Blow Fly that is pictured on Brisbane Insects.

Subject:  GREEN WEIRD BUGS
Geographic location of the bug:  My school in North America, sand box by the swings
Date: 11/02/2017
Time: 11:02 PM EDT
There are green flying bugs at my school’s sandbox. Whenever I go to get on one of the swings in the sand box, I get scared because kids tell me that the bugs are sand bees. I looked them up, no results besides sand wasps, which do not look like the bugs I saw. They bugs burrowed into the sand, and dug holes in it. They appeared to be a spring grass green and they kind of hovered over the ground a little like a bee. I can not get a close look at one, Im too scared, but I just avoid them whenever I can. I would just like to know what type of bug it is, and if you can not figure that out, see if you can tell me if I should avoid them/report them to the school. Thank you! (both images attached are what the bee-thing kind of looked like, a mix between the two)
How you want your letter signed:  Cassie

Dear Cassie,
The image you provided is of a Blow Fly in the family Calliphoridae which you can verify by comparing it to this BugGuide image.  According to BugGuide, they are:  “scavengers (larvae in carrion, excrement, etc.) or parasites” which might mean animals (or children) are using the sandbox for some unsanitary purposes, or that there is something dead buried in the sandbox.  BugGuide also indicates:  “Commonly seen ‘basking’ on the exterior walls of buildings (flesh flies also have this habit). Some cause myasis in humans and livestock.”

Subject:  What is this, and what is it drinking?
Geographic location of the bug:  Iowa- north Central
Date: 10/07/2017
Time: 11:45 PM EDT
This bug caught my eye.  I can only identify  a handful of bugs.   So forgive me if this is fairly common.   It looked like a hairy “hulk” for a house fly.
How you want your letter signed:  Bug Novice

Dear Bug Novice,
This is definitely a Fly in the order Diptera, and we recall reading once that Flies regurgitate their food, so we searched the web and found this image on Ask an Entomologist of a regurgitating Fly and the site states:  “You’ve probably noticed an intrepid fly boldly navigating your pizza, lapping up oils and pizza sauce.  Shortly after enjoying some of your meal, the fly, assuming it’s the kind with the lapping mouth parts, will have to throw it’s food back up and eat it again. If it’s walking on something solid, like your steak, it has to spit a digestive soup on it to help break it down.”  Kids’ Animal Station has a similar image with this explanation:  “Flies taste with their feet, so, if they think you taste good, (keep in mind that, from a fly’s perspective, dog poop tastes good, so you’d better hope the fly doesn’t think you taste good!) they might just vomit stomach juices on you in an attempt to liquefy your skin into something fly edible. Luckily, house fly vomit is not actually strong enough to break down human skin, but you still have to think about that tiny speck on your arm or leg that could carry disease.”  We don’t immediately recognize your fly, and its red vomit is quite eye-catching, so we will attempt to identify it.

Update:  Shortly after posting your submission, we found posting of a Blow Fly that looks like your individual on The Backyard Arthropod Project , and the speculation is that it might be Calliphora livida, but we would rather hope your individual might be a Blue Bottle Fly, Callipphora vomitoria, which is pictured on BugGuide, and whose scientific species name alludes to the possibility that it might be a frequent puker.  Alas, no BugGuide images illustrate the regurgitation process, and no mention is made on BugGuide regarding the meaning of its binomial name.

Interesting!  Thank you for your knowledge.
Originally I took the picture to send to my son who was visiting Grandma that day.   I now wish I would have taken different angles, because this fly has intrigued me since I saw it.
Unfortunately I think you may be right on this blow fly.   (However I don’t recall color.  I could be  mistaken)  We live in farm land, surrounded by thousands (maybe million) chickens, as well as pigs.   In addition these confinements have manure storage unfortunately close (within 5 miles) to our home.    We have had an increase of weeds and flies because of it.
Thank you again!

Dear Bug Watcher,
The predator in your image is a Robber Fly, but we are not certain of the genus.  We will attempt to research its identity further.  The prey appears to be a Blow Fly, perhaps a Green Bottle Fly or some other member of the genus Lucilia, a group that is well documented on BugGuide.