Subject:  Name of moth/butterfly
Geographic location of the bug:  Alicante, Spain
Date: 05/06/2020
Time: 09:27 AM EDT
Your letter to the bugman:  Hello,
I have two of these beauties flying around our garden, one male one female as they have been trying to mate the last couple of days.
Does anyone recognise them? I’ve lived in Spain 15 years and never seen them here before.
They are lovely.
Thank you
How you want your letter signed:  Michaela 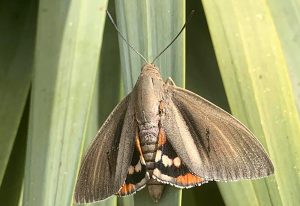 Dear Michaela,
This is a Butterfly Moth, Paysandisia archon, a South American species that has been introduced to Europe.  According to the Invasive Species Compendium, it:  “is a Neotropical species indigenous to South America: Argentina, Brazil, Paraguay and Uruguay. In Europe it has been reported from Bulgaria, Cyprus, Denmark, France, Italy, Greece, Slovenia, Spain and the UK.” 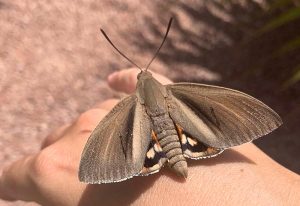 Ed. Note:  June 25, 2014
This request arrived during our absence from the office, hence the delay in our response.  We are still feebly trying to catch up on our unanswered mail.

Subject: Hawk(moth)
Location: calonge,Girona,Spain
June 18, 2014 6:35 am
16-06-2014 I found this moth flying at daytime in our garden.It looks like a kind of hawk-moth,but I´ve never seen this species before.The wings are a bit worn off,but the hindwings are still very eyecatching with the bright orange color and black/white markings.Location:Calonge,Girona,Spain.
I hope somebody knows the scientific name.
Thanks!
Signature: Cheers,insectlover123

Subject: Moth
Location: calonge,girona,spain
June 22, 2014 2:04 am
A few days ago I´ve already sent two pictures of this moth.
I´m very curious what species it is.
Location: Calonge,Girona,Spain.In our garden
Date:16 june 2014 daytime
A few days later on 20 june 2014 I´ve found the same specimen in our kitchen against the window-pane.It was not very active and clearly dying.Indeed after an half an hour it died and I put in a box.
On the picture is the prepared species.
Hope you can help!
Signature: insectlover123

Dear insectlover123,
This stunning moth is a Butterfly Moth, Paysandisia archon, and according to Karl who researched this for us several years ago:  “The species is Paysandisia archon and according to Wikipedia:  ‘It is native to Uruguay and central Argentina and has been accidentally introduced to Europe, where it is spreading rapidly. It is considered the only member of the genus Paysandisia.’  The larvae are palm borers and are considered a serious pest. The spread of this species is being closely tracked in France and several other Mediterranean countries and it is likely that someone may be interested in this sighting. “  According to Palms Journal:  ” [it] has been discovered recently on the French Riviera as a new pest and appears to be very noxious to palms. It is native to Argentina and Uruguay and was probably introduced into France through the importation of mature plants of Trithrinax campestris.”  You might want to consider reporting this to your local agricultural authorities.

Dear Daniel,
Thanks for your message and information.
I´m very happy that I know which species it is now:)
Much appreciated!
I´ll consider to report this to my local agricultural authorities.
Kind regards,
Jimmy Hoffman

Subject: Butterfly moth
Location: Peyriac-Minervois, France
September 4, 2013 1:22 pm
We found in our courtyard in Peyriac-Minervois, France, what seems to be a Butterfly Moth. A second one arrived a few hours later. They were very inactive on the ground. The first one disappeared after 48 hours. The second is barely alive after 4 days. We had the impression that the ”French” are monitoring them as they seem to be considered rare pests, although we don’t know why.
Photographs are attached. The ruler shown is in inches.
We should be very interested to know what trouble they cause.
Signature: Roger and Linda

Dear Roger and Linda,
We agree that this is the introduced Butterfly Moth, Paysandisia archon, which is native to South America.  According to the Palms.org website:  “At the beginning of summer 2001, INRA (Institut National de la Recherche Agronomique) in Antibes (France) was alerted by people from the Department of Var that they had a lot of palm trees severely damaged by a “white grub,” and some palms had even died. It was the starting point for an official report of a new exotic moth introduced accidentally into France. This beautiful insect – the largest introduced accidentally into Europe – is indeed a serious pest for a great number of palm species.”

Dear Daniel,
Thank you very much for your prompt and informative reply, which explains our moth’s lack of interest in our revival efforts, (sugar water, grapes and flowers!)
We are surrounded by vines and only a very few ornamental palms here.
Best wishes.
Roger and Linda

Subject: I found this moth!
Location: Buenos Aires, Argentina
March 6, 2013 4:22 pm
Hello! I really love insects, especially moths. Where I live, we don’t get to see many cute or colourful moths besides the normal household ones, so I was quite shocked when I saw this little beauty roaming around my house! I’m not sure if this moth is native to this part of the world; I think it might be an introduced species. I’d be really happy if you helped me identify this handsome little fellow.
(Sorry about the low quality pics)
Signature: Paula

Dear Paula,
We believe we have correctly identified this as a Butterfly Moth, Paysandisia archon, and it is native to Argentina and it is represented on the Butterflies and Beetles of Argentina website.  According to the Fauna of Paraguay website:  “These are large, colourful and generally rare, day-flying moths with clubbed antennae – superficially resembling butterflies. Sensilla present on the antennal clubs. Large external ocelli and chaetosemata absent. Probocis often well-developed, occasionally reduced. Maxillary palpi small, labial palpi upturned. Epiphysis present and tibial spur formula 0-2-4. Sensory brushes occur on the pretarsus before the claws. Wings broad, venation little reduced. Wing coupling via frenulum-retinaculum system. CuP vein present or absent in both wings. Male genitalia with characteristically curved aedagus. Females typically with elongated ovipositor. (Scoble 1995).”  Interestingly, we identified your moth very quickly in our own archive because we thought it resembled a Fruit Piercing Moth from the family Noctuidae (see Purdue University Entomology website), a mistake we made before when a photo of a Butterfly Moth was sent to us from France.  When we learned its true identity, we discovered it was accidentally introduced to Europe from South America, and since the larvae are borers in palms, it is expected to be a problematic invasive exotic species in France if it becomes widely established.

French mystery moth.
Location:  Montpelier, southern France
July 27, 2010 12:21 pm
My sister recently found this moth in her garden. She lives near Montpelier in southern France. Could you identify it please,as it is not listed in any of my moth reference books.
Thankyou.
Nigel Harland

Hi Nigel,
We believe you may have photographed a Fruit Piercing Moth based on its appearance, though we are not certain if Fruit Piercing Moths are found in France.  Here is a link to an Australian species.  We are posting your letter and photos in the hope that one of our readers can supply any supporting or contradicting information.

Karl researches the Answer
Hi Daniel and Nigel:
This was very tricky one because it does look like an Underwing or Fruit-piercing Moth – and it is in the wrong hemisphere! I was able to track it down only because it reminded me of a species of Castnia that I photographed in Costa Rica last winter. It is actually a Castniid moth (Castniidae), a small and mostly neotropical family of day-flying moths (a few species in Australia and Asia). They are also called Butterfly Moths and are often mistaken for butterflies. The species is Paysandisia archon and according to Wikipedia:  “It is native to Uruguay and central Argentina and has been accidentally introduced to Europe, where it is spreading rapidly. It is considered the only member of the genus Paysandisia.”  The larvae are palm borers and are considered a serious pest. The spread of this species is being closely tracked in France and several other Mediterranean countries and it is likely that someone may be interested in this sighting. Regards. Karl

Hello Daniel and Karl,
Thankyou both so much for getting a positive identification on this moth, it appears to be quite a rarity.
Thanks again,
Nigel Harland.