On December 10, 2019 · Category: Eyetail Moths Tagged With: bug of the month · Add Comment

Subject:  Moth
Geographic location of the bug:  Manaus Brazil
Date: 12/09/2019
Time: 07:51 AM EDT
Your letter to the bugman:  Hi! Hope you´re still in buisnes. I received some help from you 2016.
No 1 This Moth was photographed in Manaus Brazil 2019-10-03, in the graden of hotel Tropic(al). I have come as far as “it is probably” a Notodontidae.
No 2: This butterfly was photographed on a forest road along Rio Aripuana, about 450 km upstream from Manaus 2019-10-06. Is this really a Merpesia?
No 3: Photographed along Rio Arapuana Brazil 2019-10-10 in forest flooded 6 months a year. Fuligoridae family. I have more photos of this creature, but this is the clarest one. Is it possible to get any further? (- Would love it).
Best regards
Stefan
How you want your letter signed:  Stefan 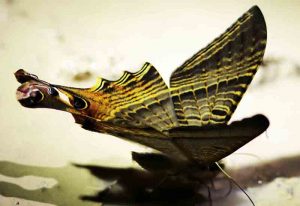 Dear Stefan,
We are going to attempt to handle your identification requests one at a time.  Your second image is actually a moth, not a butterfly.  We are confident it is a Mania Moth, Mania empedocles, from the family Sematuridae which we identified on Project Noah.  The species is also pictured on iNaturalist.  According to a FlickR posting:  “Mainly, the family is made of nocturnal and crepuscular individuals. There are 35 species in the family Sematuridae; a single genus with one species occurs in Africa (as far as my knowledge goes, so this requires confirmation) whilst the others occur in the Neotropical zone. The wingspan of adults in this family can go from 42 to 100mm and their body is robust in most species. The wings are triangular; posterior wings present a tail-like projection with oceli designs.”

Dear Daniel!
Thank you for the Id of the id. of the Mania Moth.
Linnaeus said: “Knowledge without names is worth nothing”
Now about 250 years later, I can extend his statement by feeling and saying: “Sightings without names are worth nothing”
The bugs I´m sending you currently are from a mammal- and bird-trip.
In Sweden, my home country I have seen all the Nymphalides and most of the Moths and Hawk-moths. When I´ve been out and have done my best to determine what I have seen, every addition to that is a bonus, for which I´m grateful.
I have in mind to send you two more images. I´ll send them to your Bugman page but give you some background here. The target species on the first image I´m sending you is a Heraclides (Papilio) anchisiades,  Id´ed by Jorge Bizarro, one of the top people on Nymphalides and Moths and Hawk Moths in tropical America. Both the yellow ones and white ones on the same photo I have not even tried. In Pantanal 2012 I identified Phoebis sennae, but there were probably several species on these river banks. It´ll be interesting to see if you can id any of the yellow ones and white ones on this image.
The second image i´ll present on your Bugman-page.
Best regards
Stefan

Bug of the Month June 2018: Mantispid

Costa Rican Butterflies
June 22, 2010
Dear Bugman,
I recently went on an educational trip to Costa Rica. While there, I saw many different species of butterflies but, now that i’m home, i haven’t been able to figure out the species or even what type of butterflies i had seen. This is a major issue considering the fact that i now must do a project on the different invertebrates i saw while there! The first one was spotted in my shower at a hotel in Arenal. It was hanging from the ceiling and the tear drop shaped “tails” were slightly metalic. I would estimate that it was around 3-4 inches across. The second, was spotted in Tortuguero. it was very small, only about 1.5 inches across and flew rather quickly. And the third we saw in a Butterfly garden. There were several that kept landing on us and they were about… 2 inches across. Thanks so much for your help!
Amanda K.
Costa Rica (Arenal, Tortuguero)

Hi Amanda,
We have a bit of an ethical problem doing too many identifications for your project, but we will assist with your first image.  Nothus lunus, the Eyetail Moth in the family Sematuridae, is frequently mistaken for a butterfly.  We posted a photo of a male Eyetail Moth from Costa Rica last October, and your specimen is a female.  The female is characterized by the white stripes on her wings.  The excellent Hétérocères de Guyane Française website has a great comparison image of the male and female Eyetail Moth.

WOW great thanks so much! that litterally has been keeping me up at night because it was a beautiful moth! 🙂 and i totally understand the whole ethics thing! 😉 these were just the ones i was confused on and even this one ID will really make me feel better about the project! thanks again for the help!
Amanda

Actually Amanda, we also identified and posted your photo of a Cattleheart Butterfly in the genus Paredes.

Butterfly
October 6, 2009
Hi Bugman,
Have had a lot of this kind of (butterfly?) this year.  Always shows up at night in either the house or the barn.  Can you identify it?
Thank you,
Jordan
Costa Rica

Hi Jordan,
Though it looks like a Swallowtail Butterfly, WE actually believe this is a diurnal moth and not a butterfly, but we haven’t had any luck with its identification.  It reminds us of the Sunset Moth, Urania fulgens.

Update from Julian Donahue
This is a moth in the Neotropical family Sematuridae (one species makes it, rarely, into Arizona). This particular moth goes by a number of names, and a revision of the genus is clearly needed. It is most likely Nothus (= Sematura) lunus (or aegisthus?), which occurs from Mexico to Brazil. There are anywhere from four to 11 recognized species in the genus, which also occurs in the West Indies.
Julian

Update from Karl
Hi Daniel:
This is indeed a moth, Sematura luna (=lunus?), and it looks like it is probably a male (females have a white band down the middle of both wings). The taxonomy is a little confusing as I had trouble determining if luna = lunus, or if they are closely related species or subspecies. My favourite Costa Rican reference (Mariposas de Costa Rica) uses S. luna, South American references seem to use S. lunus. It belongs to the relatively small and poorly understood family Sematuridae (subfamily Sematuerinae), which has approximately 40, mostly neotropical species. They belong to the superfamily Geometroidea, along with the Uraniidae and Geometridae families. Although they resemble the large diurnal Uraniid moths, most Sematurids are nocturnal, Sematura sp. included. They are sometimes called Eyetails, for obvious reasons. Regards.
Karl