Subject:  Unusual moth
Geographic location of the bug:  Lumberton, Texas
Date: 06/10/2019
Time: 07:58 AM EDT
Your letter to the bugman:  Good morning!
Walking outside i saw this neat little bug that looked like a circle. Upon closer look it is a moth, I believe, of some sort.
Can you identify it please?
How you want your letter signed:  DeeDee 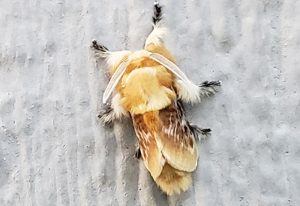 Dear DeeDee,
This is a Puss Moth or Southern Flannel Moth.  The stinging caterpillar of a Puss Moth is commonly called an Asp.

Spotted Apatelodes did not molt into Inverted Y Slug Moth

On May 7, 2019 · Category: Flannel Moths and Slug Caterpillar Moths · 2 Comments

Subject:  Is this a moth?
Geographic location of the bug:  https://goo.gl/maps/SqMDrFV5LQvREYKS6
Date: 05/07/2019
Time: 06:21 PM EDT
Your letter to the bugman:  My girlfriend found this weird looking bug in the park near our home, looks like a weird moth to me, any idea what it actually is?
How you want your letter signed:  Edmundo 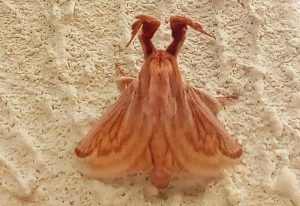 Dear Edmundo,
Though we have not located an exact visual match, we are confident this is a Flannel Moth in the family Megalopygidae, and it looks very similar to a member of the family pictured on the UGA Costa Rica blog.

Update:  Insecta.pro. Thanks to a comment from Cesar Crash who identified this as a member of the genus Perola, we were able to find this link on

Subject:  Undetermined moth from Chanchamayo, Peru.
Geographic location of the bug:  Near Naranjal, Chanchamayo, Junin, Peru.
Date: 01/30/2019
Time: 10:23 PM EDT
Your letter to the bugman:  The body and wing shape are similar to a sphingid but the antennae are all wrong.
Locality was near Naranjal, Chanchamayo Province, Junin Region, Peru on January 10th, 2019 at about 1,020 m elevation. This was the morning the rainy season began for the locality. On the dorsal side of the abdomen there were broad, horizontal bands of black coloration, maybe four or five in number – a personal observation, not visible in the photo. It was of medium size for a moth yet small for a sphingid, probably with a wingspan close to or a little more than three inches.
The feathered antennae are what throw me as I am not familiar with any hawk moths with anything close to the resemblance. To me, it is visually similar to a Giant Leopard Moth (it isn’t one) but once again, the antennae are not like most tiger moths.
Any ideas or guesses, even just the family would be very welcome.
How you want your letter signed:  Kevin 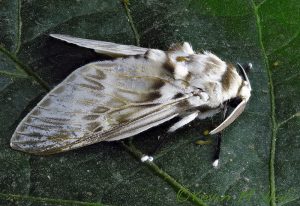 Julian Donahue provides additional information.
It’s Podalia orsilocha (or orsilochus, depending on the source), in the Megalopygidae.
Attached is an image of both sexes from plate 162 of Vol. 6 of Seitz, Macrolepidoptera of the World.
Complete life history, with photos (presumably by Dan Janzen and Winnie Hallwachs) from the Guanacaste Province of Costa Rica is here:
https://www.acguanacaste.ac.cr/paginas-de-especies/insectos/647-megalopygidae/4005-i-podalia-orsilocha-i-megalopygidae 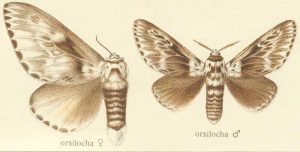 Yes, that is it!
As soon as I Googled the Latin name, there was a nice video link for YouTube with footage of the moth – exactly like the specimen I found.
You all are very good – please pass along my thanks to Julian Donahue as well.
Many thanks!
Kevin

Subject:  Some kind of mimic moth
Geographic location of the bug:  Cagayan de Oro City, Philippines
Date: 01/05/2018
Time: 04:08 AM EDT
Hi sir,
Please help me identify this insect. I think it’s a kind of mimic moth but I’m struggling to picture what it’s trying to mimic. Only found this one specimen inside a building.
How you want your letter signed:  LQ

Dear LQ,
Your moth so closely resembles the Oak Slug Caterpillar Moth, Euclea delphinii, that is pictured on BugGuide and we are confident your moth is in the family Limacodidae.  Philippine Lepidoptera has images of some similar looking moths.

Subject:  Unidentified Moths of Panama
Geographic location of the bug:  Boquete, Panama
Date: 10/01/2017
Time: 01:49 PM EDT
I find amazing, striking moths and other insects every morning on the outside walls of my house in Panama. I don’t have access to a field guide to help me identify these beauties.
How you want your letter signed:  Nora

Dear Nora,
This is a Flannel Moth in the family Megalopygidae, and we believe it is in the genus Megalopyge.  This FlickR image of Melagopyge tharops looks very close, but we believe this FlickR image of Megalopyge albicollis is a much better match, however the same species on Moths of the Amazon and Andes looks different.  Flannel Moth Caterpillars should be handled with extreme caution as many species are capable of stinging.  Please, in the future, confine your submission to a single species unless there is another good reason to submit unrelated species in the same posting.

Subject: Black waved flannel moth
Location: Fredericksburg, Virginia
June 30, 2017 12:46 am
I’m pretty certain that these photos are of the Black Waved Flannel Moth (checking against bug guide)(and reading that you have had endless photos of them). …I got no absolute confirmation from Bugguide but there were many photos of identical moths. The information I can’t seem to find, is what relationship these moths have to the Puss Caterpillar. They seem to be separate ….there are the megalopygea opercularis and then there are the species Lagoa crispata. Both Flannel Moths? Similar looking caterpillars?.
And the Puss Caterpillar is VENOMOUS but I can’t find information on how venomous the Lagoa crispata is. Or the specific caterpillar. The internet is conflicting. Are they venomous and are they AS venomous?
Signature: Susan Warner

Dear Susan,
All the images you provided are details.  We wish you had provided a standard dorsal view of the entire moth.  We believe your identification of the Black Waved Flannel Moth is correct, and the antennae indicate this is a male moth.  BugGuide does indicate:  “Caution, Hairs on caterpillar highly irritating, as in all of this family!”  So, the family Megalopygea includes both Lagoa crispata and Megalopyge opercularis, but they are classified in different genera within the family.  According to an article on the Asp, Megalopyge opercularis, by David M. Eagleman on EaglemanLab:  “Envenomation from the spines of the caterpillar causes severe pain, burning, swelling, nausea, abdominal distress, and headache. … The best known venomous caterpillar in the American south- west is the puss moth caterpillar, Megalopyge opercularis, commonly called an asp, wooly asp, Italian asp, opossum bug, wooly slug, and el perrito. It is considered one of the most toxic caterpillars in North America.”  We agree with you that the two caterpillars look very similar, and it is entirely possible that some Asp postings on our site are misidentified, and are actually the caterpillars of the Black Waved Flannel Moth.  Regarding the relative venomousness of the two species, we cannot provide you with a scale or data, but we do know that irritation and reactions to stings and bites from insects vary from person to person.  Some folks are highly allergic to the sting of a Honey Bee while other folks are barely affected at all beyond the initial pain of the sting.  Some folks have tremendous reactions to the bite of a Lacewing, while others are not affected at all.  We would urge you to refrain from handling both species, though again, distinguishing between the two might be difficult.  It is also possible that the sting of the Black Waved Flannel Moth caterpillar has not been studied as extensively as has the Asp.  Of the entire Flannel Moth family Megalopygidae, the Auburn Agriculture page on Stinging Caterpillars states:  “Flannel moth caterpillars, like slug caterpillars, do not exactly fit the description of the typical lepidopterous larva. Structurally they differ in having seven pairs of prolegs rather than five (or less) pairs common to typical caterpillars. Most are clothed with fine, long, silky hairs. There are no conspicuous large, threatening, bristle-bearing “horns” to warn of danger; however, concealed within the hairy coats are venomous setae capable of producing severe reactions.”  While the Black Waved Flannel Moth is not discussed in the article, Auburn Agriculture does clearly state:  ”  Puss Caterpillar (Megalopyge opercularis) The puss caterpillar (the adult is called southern flannel moth) is our most ‘dangerous’ stinging caterpillar. Contact may produce severe reactions including: intense burning and nettling of the skin; severe pain; reddening and inflammation; development of pustules and other lesions; numbness; swelling, which may sometimes be extensive; and nausea. Pain may persist from one to twelve or more hours. In some instances, victims have required medical attention. The larva is urticating in all stages, but severity of the reaction is generally proportional to size. Also, newly molted skins retain stinging capabilities.”  There you have it.  According to Auburn Agriculture, the Asp is “our [North American] most ‘dangerous’ stinging caterpillar.”

Subject: supplement photo (dorsal)
Location: Frederericksburg
June 30, 2017 8:19 pm
I have a dorsal view of the moth…better overall….not just the detail….of the Black Waved Flannel Moth photo i sent, to help make an ABSOLUTE identification.
It seems that both the puss variety and this one are all something to avoid. I wanted to know if seeing this moth might indicate puss or super venomous caterpillars in the vicinity. A friend in the southwest once had to go to the ER after leaning on a puss caterpillar.
Subject: Black waved flannel moth
Location: Fredericksburg, Virginia
June 30, 2017 12:46 am
Signature: Susan Warner

Dear Susan,
Thank you for sending in a supplementary dorsal view of a Black Waved Flannel Moth.