Subject:  Plant bug? What kind?
Geographic location of the bug:  Edmonton, Alberta, Canada
Date: 08/13/2021
Time: 01:55 PM EDT
Your letter to the bugman:  Found this near a creek in a boreal forest. The closest this I could find online is a Western Box Elder Bug, but it has very different markings. What do you think?
How you want your letter signed:  Scott 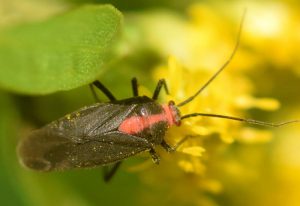 Dear Scott,
We are pretty certain this is a Plant Bug in the family Miridae, however we were not able to find any matching images on BugGuide.  Perhaps one of our readers will write in with an identification.

Probably Leaf Cutting Bee (OR NOT) and Plant Bug

Subject:  Sierra Nevada bug I cant identify
Geographic location of the bug:  Eastern Sierra range
Date: 08/12/2019
Time: 10:58 AM EDT
Your letter to the bugman:  Hi, encountered this lovely green and red (or orange?) bug at 9800 feet near a lake in eastern Sierras near mammoth,
CA. An entomologist friend thought it was a “true bug” but wasn’t sure specifically what it was. Thanks!
How you want your letter signed:  Craig P 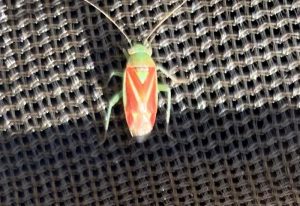 Hi Craig,
When it comes to attempting to identify unknown insects, large and showy creatures with a wide distribution range are much more likely to be documented with online images than are smaller insects with a limited range.  Species only found at higher elevations are often poorly represented on the internet.  We agree with the entomologist that this is a True Bug, but if that was the best the entomologist could provide, we might be going out on a limb stating we believe this is a Plant Bug in the family Miridae.  It looks similar to the Scarlet Plant Bug pictured on The Natural History of Orange County, but it is obviously a different species.  We had no luck browsing BugGuide which indicates there are 1930 members of the family in North America.  Perhaps one of our readers will recognize your Mirid Plant Bug.

Thank you so much! That alone is helpful (and interesting). Had no idea this would be such a stumper, but I’m also a novice.
Thanks again. Will keep eyes out for more thoughts.
CP

Probably Leaf Cutting Bee (OR NOT) and Plant Bug

Subject:  Strange fly with funky antenna and cricket legs
Geographic location of the bug:  Southern California
Date: 07/20/2019
Time: 10:54 AM EDT
Your letter to the bugman:  What is this little bug?
Can’t identify it in any list of insects in southern California
How you want your letter signed:  Thanks 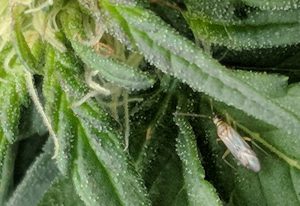 This is not a Fly. It is a Plant Bug in the family Miridae, but we are not certain of the species. We are currently having problems searching BugGuide, our go-to site for North American sightings, but we know from the past that many members of this family are predators and some feed on plants.  There many species of Mirid Plant Bugs pictured on The Natural History of Orange County, and the one that looks most like your individual to us is Dicyphus hesperus, and according to the Natural History of Orange County:  “Dicyphus hesperus is widely distributed over North America. It is a predator on pest insects including many species of whitefly, aphids, lepidopterans and mites. It is therefore used all over the world for control of pests on greenhouse and field vegetable crops. It has been especially successful for control of whitefly on greenhouse tomato crops.”  We also did a web search with the key words “Miridae” and “Cannabis” and we located this Wikipedia page on the Potato Capsid, Closterotomus norvegicus, which states:  “It can be found feeding on nettle, clover, and cannabis, as well as Compositae, potatoes, carrots and chrysanthemums. They prefer to feed on the flowers, buds and unripe fruit.”  The same claim about the Potato Capsid and Cannabis is also posted on Photos of Insects in Cambridge.  According to Cannabis Pests by J.M. McPartland:  ” True bugs, like the Homopterans (aphids, leafhoppers, whiteflies), have piercing-sucking mouthparts and feed on plant sap.   They feed predominately on leaves, but also suck on stems, flowering tops, and unripe seeds.  Bugs, unlike most Homopterans, are outdoor problems.  The southern green stink bug (Nezara viridula) feeds on marijuana in India (Cherian 1932), hemp leaves in Europe (Sorauer 1958) and hemp seeds in the USA (Hartowicz et al. 1971).  Other examples include the tarnished plant bug (Lygus lineolaris), false chinch bug (Nysius ericae), and potato bug (Calocoris norvegicus). Liocoris tripustulatus has become an emergent pest in the Netherlands, where it feeds on pollen.”  It is our observation that plant feeding True Bugs tend to aggregate while predators tend to hunt solo.  Perhaps one of our readers will be able to confirm this identification.  We are sorry we cannot say for certain if this is a predator or a plant feeding species.

Subject:  Please identify
Geographic location of the bug:  Southern California
Date: 05/01/2019
Time: 03:03 AM EDT
Your letter to the bugman:  Friend found this in her garden. None of us have noticed this spieces befor and would very much like to become familiar with it.
How you want your letter signed:  Hunter 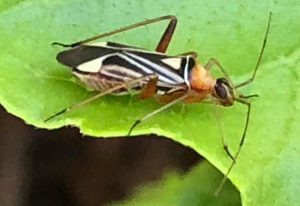 Dear Hunter,
This is a Plant Bug in the family Miridae.  We identified Closterocoris amoenus on the Natural History of Orange County website, and BugGuide does not provide information if it is a predator or a plant feeder.  We will do additional research to determine its diet.

Subject:  Green bug
Geographic location of the bug:  Finland
Date: 08/02/2018
Time: 02:21 PM EDT
Your letter to the bugman:  I am interested in name of this bug. ?
I was making some photos outside and see this bug. It was on flowers and stay there for a while.
Many thanks
How you want your letter signed:  Photographer

Dear Photographer,
We believe this is a Plant Bug in the family Miridae.  Here is a similar looking individual from the North American insect site BugGuide and BugGuide states that identifying features of Mirid Plant Bugs include:  “antennae mostly long and thin …legs slender, delicate.”  It closely resembles Trigonotylus ruficornis pictured on British Bugs.

Subject:  What is on my woody plant?
Location:  Mount Washington, Los Angeles, California
August 2, 2017 9:21 pm
Dear Bugman,
I just noticed this green bug on my woody plant, and I didn’t see any other ones, so I left it, but I am getting a sinking feeling that that might have been a mistake.  So tell me What’s That Bug on my Woody Plant?
Signature:  Constant Gardener

Dear Constant Gardener,
This is an immature True Bug, and nymphs can be very difficult to identify as many publications only provide images of adult specimens.  The incredibly long antennae lead us to believe that this is probably a Plant Bug in the family Miridae, and that is supported by the images posted to the Natural History of Orange County website.  Your nymph really resembles this BugGuide image identified as being in the genus Neurocolpus.  According to BugGuide:  “Associated with various plants, including Buttonbush, Basswood; adults visit flowers.”  This BugGuide image identified as Cephalanthus occidentalis is another possibility, and according to BugGuide:  “Apparently predacious on small arthropods”  which would mean it is a beneficial insect on your woody plant.  Though you did not intervene in its existence in any way, we are none-the-less tagging your submission with the Bug Humanitarian Award because you waited for an identification rather than acting rashly by killing things you don’t know. While we cannot with any certainty provide you with a species name, we are still confident we have the family correct.  Perhaps when this little guy matures, you can submit another image and we can provide a more conclusive identification.