Why was the Pigeon Horntail interested in an ear?

Subject:  Large Insect Identification
Geographic location of the bug:  Indiana
Date: 09/02/2021
Time: 10:19 AM EDT
Your letter to the bugman:  This insect was trying to get into my ear. I swatted it away and it came back. I killed it on my shirt. I have also seen a dead one in my garage and one buzzing me outside. It is 1 1/2 inches long. I have not notice them before. Looks like a bee to me.
How you want your letter signed:  G Riley 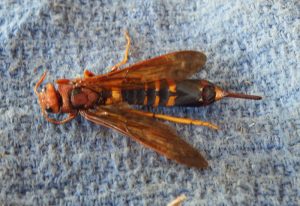 Dear G Riley,
This is a Pigeon Horntail, a type of Wood Wasp that lays eggs in diseased and dying hardwood.  We can’t imagine why it was interested in your ear.

Subject:  What this bug
Geographic location of the bug:  Nottingham England
Date: 08/15/2021
Time: 08:33 PM EDT
Your letter to the bugman:  Hi there, would you identify this little beast for me please?
How you want your letter signed:  A Draycott 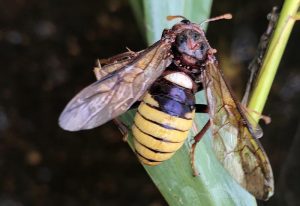 Dear A Draycott,
This is a Sawfly and we identified it as Cimbex connatus on NatureSpot where it states:  “A very large (3 cm body length) sawfly, vaguely resembling a hornet but fatter bodied”  and “The larvae feed on various alder species. When fully grown, they are about 50 mm long and have a dark dorsal stripe all the way along the body. They generally feed between July and September, but may still be found as late as October.” 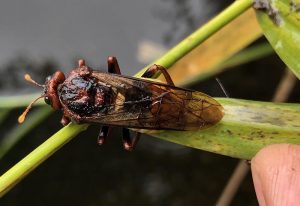 Subject:  hymenoptera
Geographic location of the bug:  Iowa
Date: 08/11/2021
Time: 10:36 AM EDT
Your letter to the bugman:  Can you ID this insect
How you want your letter signed:  Greg 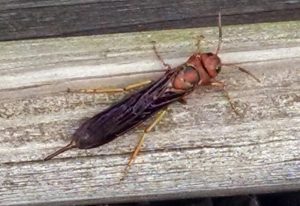 Dear Greg,
This is a Wood Wasp known as a Pigeon Horntail.  Your individual is a female and what appears to be a stinger is her ovipositor.  She lays her eggs beneath the bark of broad leaf trees and the larvae are wood borers.  They do not seek out healthy trees but generally choose diseased or rotting trees or sometimes recently felled wood.  According to BugGuide, they select “diseased, decaying or cut wood” and “hosts: beech, elm, hickory, maple, oak, poplar, apple, pear, sycamore, hackberry.”

Subject:  What is this guy
Geographic location of the bug:  Pacific Northwest
Date: 08/04/2021
Time: 04:48 PM EDT
Your letter to the bugman:  I was saving trees and was hanging out in the brush and I happened to come across this thing. Looks like a wasp but I’m not entirely sure what this thing could be.
How you want your letter signed:  Shovel logger 03 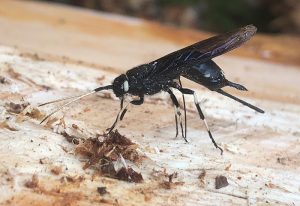 Dear Shovel logger 03
This is a Wood Wasp commonly called a Whitehorned Horntail, Uroceros albicornus.  This female will likely use her long ovipositor to lay her eggs beneath the bark on conifers.  The larvae are wood borers.

Subject:  Cool flying insect
Geographic location of the bug:  Kilchis Point, Oregon
Date: 08/05/2021
Time: 08:54 PM EDT
Your letter to the bugman:  This insect landed on a friend’s hat and just stayed. It was close to an inch long and quite robust.
How you want your letter signed:  Sara 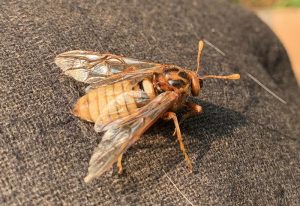 Dear Sara,
The Elm Sawfly is a non-stinging distant relative of Bees and Wasps, and it is perfectly harmless.

Wonderful! Thank you! We were leading a STEM camp for middle school girls when it appeared. We all got a good look at it and then gently moved it to some plants.
I appreciate the help!
Sara

Subject:  Flying insect
Geographic location of the bug:  Coquitlam, BC
Date: 07/27/2021
Time: 06:14 PM EDT
Your letter to the bugman:  I found this creepy flying insect while landscaping, never seen anything like it before curious what it is.
How you want your letter signed:  Zach Rayner 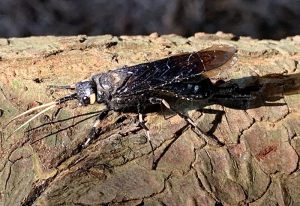 Dear Zach,
This is a Horntail in the genus Uroceros, a type of Wood Wasp whose larvae bore in wood.  There are three similar looking species in the genus found in British Columbia.  It appears your image was shot in late afternoon sunlight, and when we corrected for the warm golden color that lighting at that time of day imparts to the subject it falls upon, we believe this is the White Horned Horntail Wasp, Urocerus albicornis, which is pictured on BugGuide.   According to BugGuide:  “hosts include fir, larch, spruce, pine, Douglas-fir, hemlock, and western red cedar.”

Thank you very much for your quick response to my question it is highly appreciated
For a second I thought I had discovered a new species of insect because I had never seen anything like it before in my life
Thanks again!