Subject:  Ladybird Bug
Geographic location of the bug:  Mornington Peninsula, Victoria, Australia
Date: 03/28/2019
Time: 01:30 AM EDT
Your letter to the bugman:  I am keen to identify this Ladybird Bug as friend or foe – have many of them in the garden.
How you want your letter signed:  Lyndie 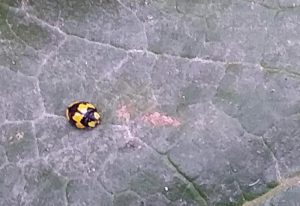 Dear Lyndie,
This is a very interesting submission for us.  We quickly identified your Fungus Eating Lady Beetles, Illeis galbula, on the Brisbane Insect website where it states:  “Both adults and larvae feed on fungus and black mold on leaves” and “The Fungus-eating Ladybird larvae grow up to 8-10mm.  They are creamy white in colour with lines of black dots on their back. They are usually found feeding those black mold or fungus on leaves. The larvae runs very fast when disturbed.  Larvae feed only on powdery mildew type of  fungus (Oidium sp., Erysiphales) which infecting various plants. ”  Most Lady Beetles are considered beneficial as they are predators, but we have never heard of a beneficial Lady Beetle eating detrimental fungus on plants.  We decided to find another source for information, so we found the New Zealand Arthropod Collection Fact Sheet Series where it states:  “This adventive ladybird was first found in New Zealand in 1985 in Auckland. It comes from Eastern Australia and is also found in New Guinea. It is now present in New Zealand’s North Island, where it occurs in gardens, parks, and other areas where powdery mildew fungi infested plants occur. It is most commonly seen on cucurbits (Curcurbaceae).”  The site also states:  “The adult and larval ladybirds eat powdery mildew fungi and are probably attracted to the smell of powdery mildew. This kind of fungus forms white growths on the surface of leaves that include its fruiting bodies (spores). In spring the over-wintering adults may feed on pollen. The adults and larvae of many fungal feeding ladybirds have modified mouth parts for scraping fungal hyphae and spores from the surface of leaves.” 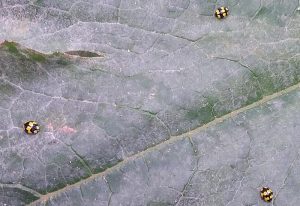 Subject:  Pretty Spider
Geographic location of the bug:  Antigua Guatemala
Date: 03/25/2019
Time: 12:57 PM EDT
Your letter to the bugman:  Hey there!
This gorgeous spider has been hanging out in my shower for the past 3 weeks. It doesn’t move, nor does it flinch when I move. It’s just been growing (look at size difference of body from week 1 to now)
How you want your letter signed:  Leilani 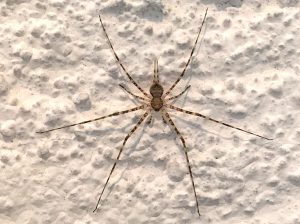 Dear Leilani,
This really is a beautiful spider.  It looked vaguely familiar to us, and we searched for spiders with long spinnerets, and discovered the Trapped in Nature & Exploration Malaysian blog with an entry about Tree trunk spiders belong[ing] to the Family Hersiliidae.  We have a Two-Tailed Spider from Indonesia in our archive, so we searched BugGuide for North American representatives, and there discovered Neotama mexicana which ranges from “Cameron and Hidalgo Counties of southmost Texas, south to S. Amer” and the “Perch head down on tree trucks or stone walls.”  BugGuide also notes:  “When an insect approaches the waiting spider, the spider jumps over the prey. The spider then spreads silk by rapidly running in circles with the spinnerets toward the prey. When the prey is completely wrapped, it is bitten and eaten. They are amazingly fast. No snare is built.”

Subject:  What is it?
Geographic location of the bug:  Chehalis, Washington
Date: 03/25/2019
Time: 08:49 PM EDT
Your letter to the bugman:  This is the second time I have found one of these on my property. This one was on my concrete front porch.  It is in a quart canning jar in photo.
How you want your letter signed:  Blonder 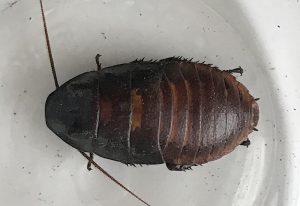 Dear Blonder,
This is a Cockroach, though we do not believe it is one of the species that commonly infests homes and businesses.  We will attempt to determine its species, or at least its genus.

Cockroaches from the Philippines

Subject:  What kind of bug is this?
Geographic location of the bug:  Popano Beach, Florida
Date: 03/27/2019
Time: 10:45 AM EDT
Your letter to the bugman:  This bug is really different. What is it?
How you want your letter signed:  Alice 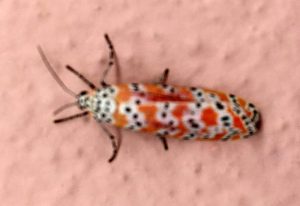 Dear Alice,
This is an Ornate Bella Moth, Utetheisa ornatrix bella, a species represented on our site with a pale individual, but BugGuide has an image colored similarly to your individual.  According to BugGuide:  “adults fly during the day” and “adults fly from July to September in north; all year in south.”

Subject:  What kind of beetle is this?
Geographic location of the bug:  Tri-state area: MI, IN, OH
Date: 03/27/2019
Time: 07:18 PM EDT
Your letter to the bugman:  I found this insect dying on my deck (though the dog may have put it there). I’ve never seen one like it, much less at the end of March when very little is moving here yet. I assume it’s a beetle of some kind, but Google isn’t much help.
Thanks for answering my curiosity if you have the time! 🙂
How you want your letter signed:  Curious Gardener

Water Scavenger Beetles from the UK

Subject:  Insects
Geographic location of the bug:  Mexico, Yucatan peninsula,
Date: 03/28/2019
Time: 08:52 AM EDT
Your letter to the bugman:  I found this group of insects all huddled up together on a branch in early February this year while on vacation in Mexico.  I have no idea what they are but I was fascinated by them.  I also wondered why they were all together like this.
Thanks a lot.
How you want your letter signed:  Paul 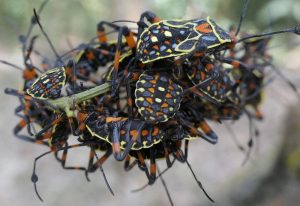 Dear Paul,
These are Giant Mesquite Bug nymphs in the genus Thasus.