Subject:  Orb weaver spider
Geographic location of the bug:  Southwestern pa. South of Pittsburgh
Date: 09/28/2021
Time: 07:00 PM EDT
Your letter to the bugman:  I love this site… Your amazing… We have had this little lady living on our front window for a whole now. We named her Muffet. I’m pretty sure it’s a furrow orb weaver… Just wanted to get your opinion. Thanks again
How you want your letter signed:  Robert 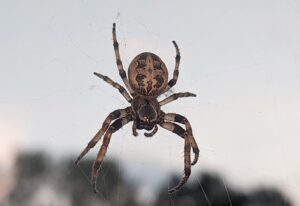 Dear Robert,
Thanks so much for your kind letter.  Alas, we do not feel confident that we are able to conclusively identify your Orbweaver accurately to the species level.

Gasteracantha elipsoides: "Come Into My Parlor"

Subject:  Weird beetle?
Geographic location of the bug:  Northwest Georgia
Date: 09/29/2021
Time: 04:48 AM EDT
Your letter to the bugman:  I found these weird bugs all over my rose of Sharon tree in clusters on the buds that never opened. What are they?
How you want your letter signed:  Jms 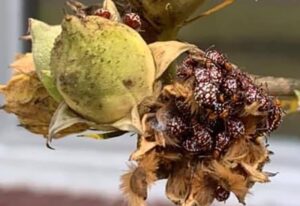 Dear Jms,
These are not Beetles.  They are Scentless Plant Bugs, Niesthrea louisianica, and all of our reports are on Rose of Sharon.

Subject:  Unidentified bug
Geographic location of the bug:  China, Hong Kong, Tseung Kwan O Village
Date: 09/29/2021
Time: 07:17 AM EDT
Your letter to the bugman:  I have this huge bug, or maybe two bugs with sixteen legs in all on top of each other, rising and falling. I don’t know if the strands are cocoon silk or legs. The top has bristly hair, dark grey.
How you want your letter signed:  Ｕｎｉｄｅｎtiｆｉｅｄ ｂｕｇ 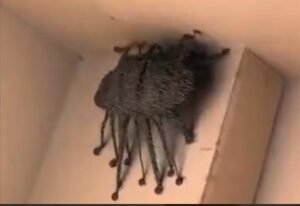 We have no idea what this thing is, but it is not an insect.  We somehow suspect humans were involved in the creation of this thing.  Perhaps our readers will be willing to speculate on its identity, and perhaps someone with some knowledge about this thing will write in with information.  Is this thing on the wall, on the ceiling, on steps or on the floor?  The location in your image is quite ambiguous.

Subject:  Strange Bug in Malaysia
Geographic location of the bug:  Malaysia
Date: 09/30/2021
Time: 05:25 AM EDT
Your letter to the bugman:  Hi – friend of mine sent a video of this strange creature – suspect it’s 2 one of top of the other – but we can’t ID it
How you want your letter signed:  Kate Adkins

Dear Kate,
You are the second person to send us this image.  The first submission claims the creature was in China, Hong Kong, Tseung Kwan O Village.  We suspect this is a new internet hoax.

Assistance Requested from our Readership: What are the Mysterious Droppings???

Subject:  Large insect I spotted.
Geographic location of the bug:  Lincoln County, Southwest Wyoming
Date: 09/28/2021
Time: 06:08 PM EDT
Your letter to the bugman:  Dear Bugman,
I was hiking on a hill and spotted this large bug on the ground. I searched through a site with pictures and categories, but couldn’t get a match.
I took this photo with a Moto smartphone zoomed out, about 4-5″away. Bug is about 2″ long.
Location:
On a foothill just East of Kemmerer, Wyoming.
Elevation: about 7000 ft.
Season:
September 27, 2021 at 5pm
I would appreciate any insight. Thank you!
How you want your letter signed:  Bill R. 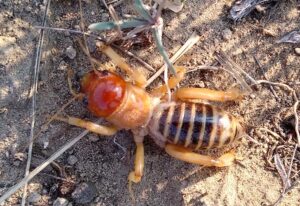 Dear Bill,
This is a Jerusalem Cricket or Potato Bug, two common names that really do not adequately describe an unusual group of insects in the only genus found in North America, Ammopelmatus, in the family Stenopelmatidae.  Sightings of Potato Bugs are quite common in the Los Angeles area, and when Daniel began writing What’s That Bug? in print over 20 years ago, he thought, as many naturalists thought, that these critters were limited to the American Southwest.  Internet reporting by regular folks like you have caused scientists to realize that the range of Potato Bugs includes many other western states.  BugGuide reports previous sightings from Wyoming, but we speculate they are not too common at the edge of their reported range.  Potato Bugs are subterranean dwellers that often come to the surface after a rain.  According to BugGuide they:  “Live in burrows and under rocks, logs, may wander on surface at night. Adults, and sometimes nymphs, strike ground with abdomen to produce species-specific drumming patterns (1). Female makes depression in soil for masses of oval, white eggs. Female often devours mate.”

Subject:  Black beetle on princess gums
Geographic location of the bug:  Southern Victoria Australia
Date: 09/28/2021
Time: 09:50 PM EDT
Your letter to the bugman:  I cannot find a picture anywhere of this beetle .. four white spots on its back .. non on it’s head
How you want your letter signed:  corobin knox 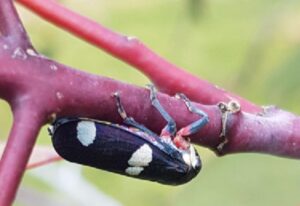 Dear Robin,
We believe we have correctly identified your Leafhopper (not Beetle) as a Common Jassid, Eurymela fenestrata, thanks to the Brisbane Insect site where it states:  “Common Jassid is one of the largest size leafhopper in the Eurymelinae. We sometimes call them Large Gum-treehoppers, The adult is brown and dark violet under sunlight. There are some white spots on its wings. Nymph has the reddish-brown body with black markings. Gum-leafhopper sometimes called Jassid because they were classified as family Jassidae before, then now the family Cicadellidae.“

Homopteran and Flower Wasp from Australia

Subject:  Gray Bird Grasshoppers on Cannabis
Geographic location of the bug:  Mount Washington, Los Angeles, California
Date: 09/25/2021
Time: 01:36 PM PDT
Your letter to the bugman:  Dear Bugman,
This past weekend I observed this male Gray Bird Grasshopper just sitting on a AI Cannabis plant and I marvelled at how my gardening style towards Grasshoppers has changed recently.  As I watched this guy just relaxing on the plant, sprawled across one of the smaller leaves and I realized that I have never witnessed Grasshoppers eating my buds.  I find leaf damage but never damage to the buds other than that caused by dreaded Budworms.  The decision I made after realizing this is that, especially later in the season, there is no longer a need to relocate the Grasshoppers.  Earlier in the summer I relocated 6-8 immature Gray Bird Grasshoppers I found on my plants to a native willow trees about 30 feet away.  Relocating nymphs might still be a good idea because when the plants are younger, the leaves are needed to supply strength to the woody plant as it is growing.  Once the leaves begin to yellow they no longer positively contribute to the health of the plant, so it is the prefect time to allow the Grasshoppers to munch on the leaves.
How you want your letter signed:  Constant Gardener 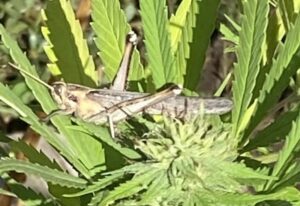 Dear Constant Gardener,
Thanks for your wonderful posting and images.  We loved hearing about your growth in the area of gardening. 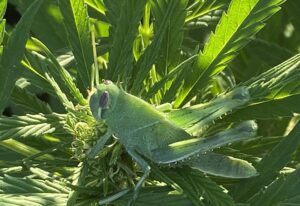 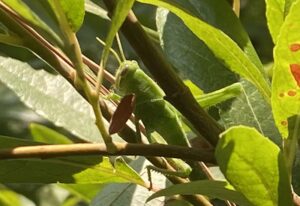