Subject:  What is this bug?
Geographic location of the bug:  Cincinnati ohio
Date: 09/27/2021
Time: 07:48 PM EDT
Your letter to the bugman:  This bug fell from a tree at winton woods park onto my car.
How you want your letter signed:  From Pamela Cupp 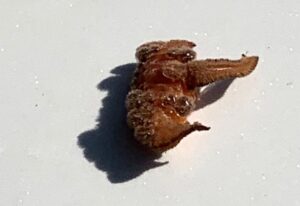 Dear Pamela,
Upon reading your letter, Daniel immediately suspected correctly that you encountered a Monkey Slug.  These stinging caterpillars frequently fall from trees onto cars.

Thank you.  I’d never seen anything like it.  Appreciate your reply.
Take care,
Pamela
0

Subject:  Help with vespid ID
Geographic location of the bug:  Morgantown West Virginia
Date: 09/27/2021
Time: 07:11 PM EDT
Your letter to the bugman:  Had this insect in my home. Looks like a vespid of some kind. Can’t really match it to any photos we see online. Your help is appreciated
How you want your letter signed:  Dana 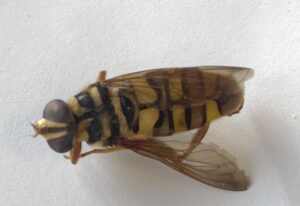 Dear Dana,
This is not a Vespid nor any other type of Wasp.  This is a Fly in the family Syrphidae, commonly called Flower Flies or Hover Flies.  Many species in the family Syrphidae are effective mimics of stinging wasps and bees which helps to protect the harmless flies from predators who mistake them for a stinging creature.  We will attempt a species identification for you if we have time.  There are extensive archives on BugGuide should you decide to attempt your own research.  We believe we have correctly identified it as a Virginia Flower Fly, Milesia virginiensis, on Insect Identification for the Casual Observer.

Wow! Thank you for the prompt reply and your expertise!
Your time is much appreciated!

Subject:  What is this?
Geographic location of the bug:  Manchester, Michigan
Date: 09/28/2021
Time: 09:21 AM EDT
Your letter to the bugman:  I found this scary looking bug in my garage this morning.  About 3 inches long.
How you want your letter signed:  Sue 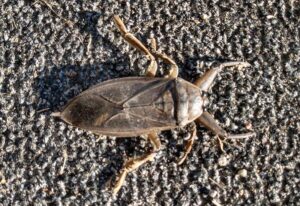 Dear Sue,
This is an aquatic predatory True Bug known as a Giant Water Bug, and it is generally found not far from a source of water.  Toe-Biter is a common name because of the large number of swimmers and waders who have been bitten while in the water.  Because they are attracted to electric lights, often in great numbers, they are also called Electric Light Bugs.

Thank you for answering on the water bug.  I had never seen one before.  Scary looking.

Subject:  Flying Insect Identification
Geographic location of the bug:  Mercer Island, WA
Date: 09/25/2021
Time: 04:49 PM EDT
Your letter to the bugman:  Hi
I don’t know if the pictured bug from my patio is a flying termite or flying ant.  Please help with id.  Thanks
How you want your letter signed:  Victor 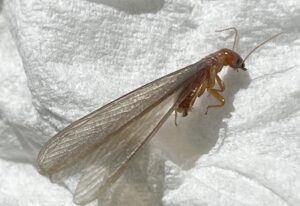 Dear Victor,
With both Ants and Termites, only the reproductive kings and queens have wings which they lose shortly after mating during a nuptial flight.  Workers are wingless.  This is a Termite alate, the term used for winged reproductive ants and termites both.  We believe it is a Pacific Dampwood Termite which is pictured on BugGuide.  This is not a species that is considered to be destructive when it comes to homes.

Possibly Evidence of Termites from Ghana

Subject:  I want to know what kind of Rhinoceros beetle
Geographic location of the bug:  Bear, DE
Date: 09/26/2021
Time: 12:57 AM EDT
Your letter to the bugman:  Hi, I found the Rhinoceros   beetles 2days in a row at my yard. But I don’t know what kind of it. I’m so curious which Rhinoceros beetle they are.
I found the first one at 9/24. It was belly up when I found it. So I thought it was dead at first. But it actually moved slowly when I poked with a mulch stick. So I took it to the tree.
This one was dark brown on the left side and there were white point on the right side and head part.
The second one had more white base and brown connected dot design.
They were both cute. Then both had the blond bangs and it was so cool.
I wanna teach my son about that beetle. But I don’t know the name. So please teach me what kind of Rhinoceros beetle.
Thank you!
How you want your letter signed:  Miso-sugar 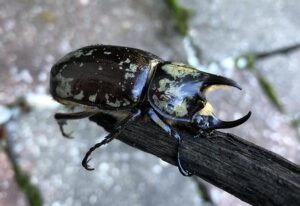 Dear Miso-sugar,
The easiest way to avoid the confusion of duplicative common names that may differ from region to region is to call insects by their accepted scientific binomial name, and in the case of your submitted Rhinoceros Beetles, they are male Dynastes tityus, a species with several different common names, though we most often call them Eastern Hercules Beetles.  According to BugGuide, other common names are “Rhinoceros Beetle, Unicorn Beetle” so your initial identification is also acceptable.  This species can be highly variable, and according to BugGuide they are described as:  “Huge size, greenish elytra with variable amounts of dark spots. Some are nearly black. Male has massive horns projecting forward from head and pronotum.”  This is the heaviest beetle in North America. 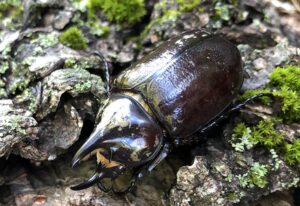 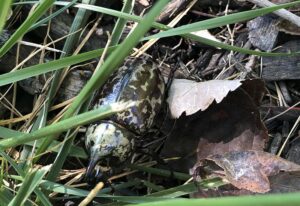 Subject:  Which wasp is this?
Geographic location of the bug:  SW Missouri
Date: 09/23/2021
Time: 07:18 AM EDT
Your letter to the bugman:  I noticed this wasp in some goldenrod this past afternoon.  I did not recognize it.
Can you help identify it, please?
How you want your letter signed:  Dave 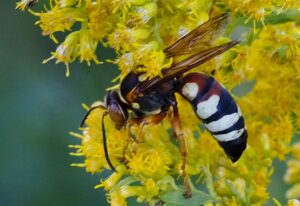 Dear Dave,
At first we mistook this for an Eastern Cicada Killer, but the white markings on the abdomen did not seem right.  Upon researching the Eastern Cicada Killer on the Missouri Department of Conservation site, we realized this was a similar looking Sand Wasp, Stizus brevipennis.  According to BugGuide which has a visual comparison between the two species:  “This species looks superficially quite like Sphecius speciosus (the eastern cicada-killer wasp), but the abdominal banding is much less ‘ornate’. These markings lack a hooked structure and are overall broader and smoother. The scutellum and postscutellum are also marked in yellow, unlike in S. speciosus.”  This is a new species for our humble website and for that we are grateful to you, however, considering how similar these two species look and considering the large number of Eastern Cicada Killer postings on our site, we suspect that one or more might actually be misidentified Stizus brevipennis.  Also, your individual is nectaring on goldenrod, a very important plant to many species of insects, and we are tagging it as Goldenrod Meadow as well.